Our first Skywriters Anthology, published by Interactive Publications Pty Ltd (IP), will be launched in Tamworth, NSW, on 31 October 2019. It includes works by fifty writers from inland NSW and beyond.

The works to be included were blind-selected by our curatorial team from submissions received following our call-out in late 2018. Congratulations to the authors of all the selected works.

Press release about the book launch >>

Our Skywriters Project invites creative writers, aspiring writers and skylovers to author new stories, in any genre, about their own or other people’s (or other beings’?) relationships with celestial phenomena in our Southern Sky, as experienced from within the fuzzy borders of inland southeastern Australia’s 700 Kilometre Array (700KA) of astronomical observatories. 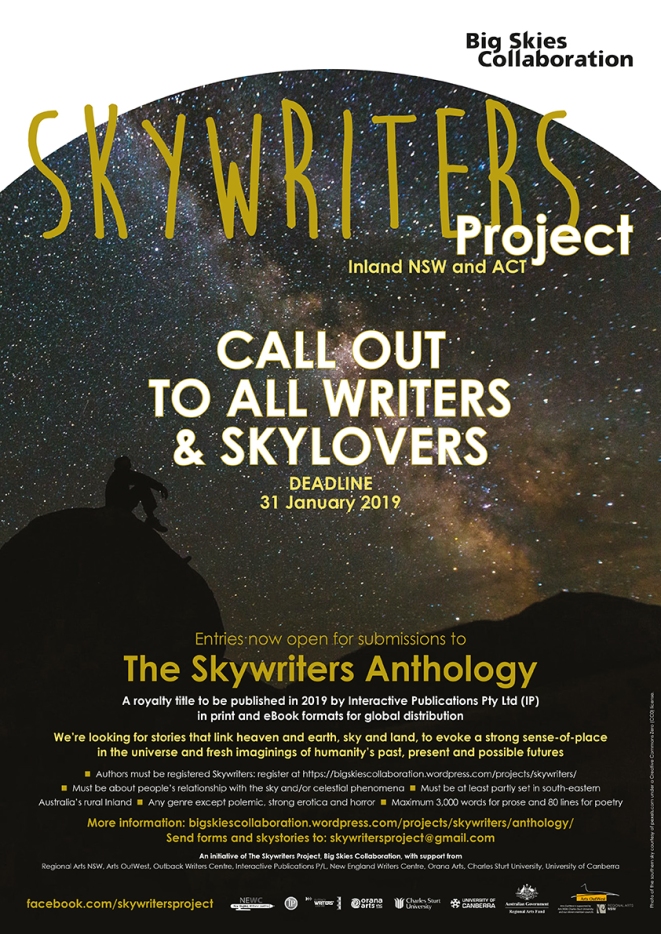 We have achieved all this in just one month (March/April 2017) with the in-kind support of library staff; our partner organisation Arts OutWest and other Regional Arts Development Organisations (RADOs), including Orana Arts, ArtsNorthwest, and Outback Arts;  Dubbo’s Outback Writers Centre; local radio stations and newspapers; other in-kind sponsors, including ANU’s Research School of Astronomy and Astrophysics (with special thanks to Dr Brad Tucker for printing our Skywriters posters and postcards for smaller libraries); a very effective collaborative social media campaign by Skywriters and supporters on Facebook, Twitter and other platforms; plus our great guest speakers. Oh, and, of course, all the amazing sponges, slices, biscuits, tarts, fairy cakes, sandwiches and nibbles provided by our Skywriter librarians and their support crews!

We’ve all been part of something we can be very proud of over the past month. Again, congratulations! To all of us! … We can now begin our next big challenges: creating a  solid and supportive inland Skywriters network, and producing some superlative skystories for publication in 2019!

HOW TO BECOME A SKYWRITER AND WHAT DOES THIS MEAN?
You’re already a registered Skywriter if you’ve filled in one of our registration forms and returned it to Merrill, the project coordinator. This means you’ll be on our emailing list and should receive newsletters and invitations to our attend gatherings. You’ll also have access to the Skywriters Facebook group and other social media to connect with fellow Skywriters. You’ll be able to email or sms Merrill for support, updates and/or advice about your writing projects; and you’ll be able to enjoy many opportunities to engage face-to-face with fellow Skywriters, astronomers and other researchers in our region. Plus, of course, you’ll have an opportunity to be published in our Skywriters Anthology in 2019.

By becoming a Skywriter you’ll not only be developing your own creative talents and research skills, but you’ll also be co-creating an inspiring, inclusive and, we hope, enduring inland literary community … And who knows where this might lead? Could it catalyse a literature-led renaissance in rural communities? An explosion of new ideas? Imagine …

To find your nearest Skywriters hub, click on the purple dots on the map below.

ANTICIPATED OUTCOMES
Outcomes of our Skywriters Project are expected to include:

financial support from the Regional Arts Fund, through project partner Arts OutWest, and in-kind support from ANU’s Research School of Astronomy and Astrophysics at Mount Stromlo; libraries and local government authorities within the 700KA region, as listed above; Bathurst’s historic Lachlan Inn; and from other individuals, groups and institutions who are contributing to this project. Our combined efforts will work marvels!

The stars quotation is from the first stanza of Henry Lawson‘s 1888 ballad, ‘A May Night On The Mountains’, as shown on a mural in the corridor of Weddin Shire Council’s Community Hub, in Grenfell, New South Wales. Lawson was born in Grenfell in 1867. Read his entire poem here >>